Franz Gotthard SCHAFFGOTSCH was born in the westernmost Austrian city of Bregenz on December 13, 1902 and was baptized Catholic. He was the eighth of the eleven children of Rosa von Schönberg and her husband Levin Gotthard Graf SCHAFFGOTSCH.

When he was born his father was the head of the Bregenz municipal district under the Austro-Hungarian Monarchy and his father ended up as Imperial & Royal Landespräsident in Salzburg – where he died in August 1913. As the noble family of a high official in Salzburg they all had local citizenship rights in the city and they lived at 25 Arenbergstraße in the Äußerer Stein neighborhood.

It is hard to identify the specific locations and addresses of one of the eleven siblings: Franz SCHAFFGOTSCH didn’t follow the civil service administration career track of his father as he was more of an artist – though without a completed academic training. Like his role model Alfred Kubin he was soon stigmatized as a »degenerate« artist. In 1925 he had his first provocative exhibition in a Salzburg art exhibition and his portfolio Beasts with fantastic and grotesque drawings was published in Munich that same year. He was able to distinguish himself as a stage designer in Salzburg by painting fairy tale pictures for the miniature stage of the famous Salzburg Marionette Theater, and he also illustrated children’s books.1

At the same time he represented a high class auto company and circulated in the high society of the Salzburg Festival. There he fell in love with an artist 13 years older than himself, the divorced wife of Einar Nilson – who was Max Reinhardt’s house composer who had composed the music for the famous Jedermann production that was the core of the Festival.

At the end of 1926 Franz SCHAFFGOTSCH and Hede Nilson, who converted to Catholicism, married in the Salzburg cathedral. The bride had been born near Hamburg in Altona bei as Hedwig Vetter, and she had been baptized Lutheran (her mother had converted from Judaism). She had a son from her first marriage who lived in Salzburg with his mother and her second husband. At first they lived in the Parsch neighborhood, but ended up in the parental home of Franz SCHAFFGOTSCH, whose mother died in 1940.

It is claimed that SCHAFFGOTSCH took part as a member of the paramilitary Heimwehr in the fighting north of Salzburg in Lamprechtshausen against the Nazi’s attempt to seize power in July 1934, but that can’t be confirmed. But there is no doubt that SCHAFFGOTSCH was a functionary of the Fatherland Front, the political organization of the Austrian dictatorship, and beyond that he was a member of the dictatorship’s Protection Corps that was modeled on the Nazi SS and was responsible for internal security. The dictatorship’s functionaries were targets of Nazi terrorist attacks like the bombing on July 11, 1934 aimed at a Fatherland Front district leader that killed Hermine GRAUBNER as she passed by.

In September 1935 a series of letter bomb attacks was directed against ten addressees, Archbishop Dr. Sigismund Waitz was the most prominent among them. It was thwarted, but a policeman who tried to open a suspicious letter was severely injured. Many terrorist attacks went unprosecuted because the Nazi perpetrators knew they could escape across the nearby German border into the protection of the Nazi regime.

One of the files in the Salzburg State Court regarding the numerous unprosecuted attacks that had caused damage includes the name of Franz SCHAFFGOTSCH as a potential victim – which makes it clear that he was one of those identified by the Nazis as their worst enemies, many of whom were targeted for persecution when the Nazis took over Austria.

We know that in 1938 the Salzburg Gestapo targeted at least 35 people for political revenge who were sent as »protective custody prisoners« to the Dachau concentration camp without any judicial processes, including Rudolf BEER, Johann FACINELLI, Wilhelm JAKOB,Otto KEMPTNER, Johann LANGER and Georg STRASSER.

Hedwig and Franz SCHAFFGOTSCH missed the March 1938 »Anschluss« (the annexation of Austria by Nazi Germany that was gleefully celebrated by large numbers of Austrians) because they had been on an extended vacation in Liguria [northwestern Italy] since February 16, 1938. Thus they escaped the terror against Jews and political opponents that the Nazis implemented immediately. Pessimistic reports from their family in Salzburg led the SCHAFFGOTSCHs to embark on an uncomfortable search for safety that took them to various Italian and Yugoslavian locations from Trieste to Fiume [Rijeka since 1945], to the isle of Rab and then Zagreb, and on to the isle of Sipan, then Mostar, and Sipan again.

Then the Germans conquered most of Yugoslavia in April 1941 with the assistance of the local fascist Ustasha in Croatia and Bosnia-Herzegovina and the Italian forces in the eastern Adriatic Italian enclaves.

Yugoslavian Dubrovnik (Ragusa) became part of the Ustasha ruled puppet state of Croatia and the real suffering of the two refugees from Salzburg began. The SCHAFFGOTSCHs were arrested by the Ustasha police on the island of Sipan just off the coast from Dubrovnik in September 1942, probably at the instigation of the Gestapo, and were turned over to Italian occupation forces in Dubrovnik where they were interned. They weren’t turned over to the Gestapo as they had feared, but Franz SCHAFFGOTSCH came down with typhus in the internment camp and died on December 21, 1942 – a few days after his 40th birthday.

His widow Hedwig was able to conceal her real identity and survived the terror years as a hospital aide in Yugoslavia and Italy. Hedwig SCHAFFGOTSCH ended up in Turin where she experienced the liberation and was reunited with her US soldier son Nils to the joyful surprise of them both. In 1949, as Hedwig Gräfin SCHAFFGOTSCH, she published her memoirs of her years on the run in Munich under the title The Lovers are all from One Country – a Woman’s fate. The book ended with a visit to Salzburg where she found no quarters (none of her burdened friends and relations offered her any): »so then I also had to completely give up on Salzburg as a homeland«.

Hedwig (Hede) SCHAFFGOTSCH (born Vetter and with the married name Nilson before her divorce and remarriage) died in Munich at age 87, where her son Nils C. Nilson also lived as a US citizen. 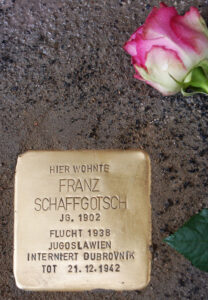 All stumbling stones at Arenbergstraße 25