Josef Wimmer was born in Vienna on June 1, 1903. He was married with five minor children, the youngest of whom was born in Salzburg in 1941. He was and his wife Mathilde operated their own Kiosk in the main Salzburg railroad station and they lived in municipal housing at 6 Glockengießerstraße in the Maxglan district of Salzburg.

Josef Wimmer didn’t belong to any resistance group, but he was considered an opponent of the Nazi regime. It can be assumed that he was denounced and persecuted on political grounds. Because of the lack of police, judicial and victims’ assistance files we can only be sure that Josef Wimmer was taken by the Gestapo on August 25, 1944 and held in the police jail without having been convicted of any crime. We do find documents showing that the 41 year old prisoner was deported to the Dachau concentration camp on October 21, 1944 and registered as »protective custody« prisoner number 117331. On November 24, 1944 he was transferred to Auschwitz where he was murdered at some unknown date.

After the liberation of Salzburg, Mathilde Wimmer had the police search for her missing husband. All they could determine was that Josef Wimmer had been arrested by the Gestapo for anti-Nazi activities had been taken to Auschwitz and was regarded as missing. In order to be eligible for victims’ compensation she would have had first to get the court to declare him dead, but before she could do so the 51 year old widow died in Salzburg. One of their five orphaned children ended up in Tyrol and another in Germany, while three of them saw no future in Austria and emigrated to America and Australia in the 1950s.

Josef und Mathilde Wimmer’s son Egon, who emigrated to Australia more than fifty years ago was very moved by the honoring of his father in Salzburg and informed us about further events:

Our mother, my older sister Hermine and I already knew in the last months of the war in 1945, that our father had been taken from Dachau to Auschwitz, but we had no idea what was going on in that camp. Mother did her best to get him out, sadly in vain. We had no idea how he died, and under the circumstances that may have been a mercy, we tried to learn when he died from the Red Cross and the Polish authorities, but never got any »positive« answer. Mother had to work like an animal to raise us and had no time toseek help and compensation. After her death and a little late, but not too late, I tried to get some financial justice for our sad loss from the German government. But I was turned down on one pretext or another regarding laws that were constantly changing to prevent any fair compensation. Unfortunately we couldn’t afford a lawyer. Austria decided somewhat later to provide some limited compensation for Nazi victims and I have to acknowledge appreciation for my former homeland for that. That’s the short version of our very sad story.
(Egon Wimmer, Canberra October 30, 2013) 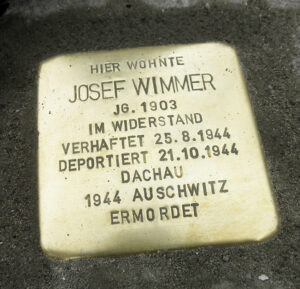 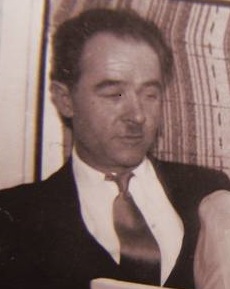 All stumbling stones at Glockengießerstraße 6