Margarethe WEISSENSTEIN was born in Vienna on November 5, 1893. She was the oldest of three daughters born to the Jewish couple Else Kuffler Weissenstein and Emanuel Weissenstein. Her father, Emanuel Weissenstein, was the director general of the United Jute Mills company of Vienna and Budapest.

The High Life Almanac of Vienna’s high society counted the Weissenstein family among those Jews who were completely assimilated into the upper levels of the educated bourgeoisie of the city and reported that they lived at 39 Felix-Mottl-Straße in the elite Wien-Döbling neighborhood. The 79 year old Emanuel Weissenstein died in Vienna in May 1938. His daughter Margarethe was active in art and music businesses and varied her residence between Vienna, Berlin and Salzburg, before going into exile in Paris and finally Milan.

In 1928 Else Weissenstein and her daughters Margarethe, Elisabeth (Lisa) and Dorothea acquired the villa at 11 Franz-Josef-Straße (16 Faberstraße) in Salzburg that had been a sanatorium since the days of the Habsburg monarchy. They called it the Hromada Sanatorium after its new director and chief surgeon, Lisa Weissenstein’s husband Dr. Gebhard Hromada. As there was no Jewish hospital in Salzburg the city’s Jews relied on the Hromada Sanatorium in the Andrä-quarter until the violence of 1938.

The Nazi regime classified the villa as »Jewish property«, but for some unknown reason it wasn’t expropriated outright. Instead it was placed in receivership based on a lien placed on the property by the German government against an enforceable claim under the so-called »Reichsfluchtsteuer« – the »flight tax« imposed on Jews who left the territories of the Third Reich. The former Hromada Sanatorium served the German Army as a »hygiene research institute« or »examination site« (a vague designation).

After being widowed in May 1938 Else Weissenstein and her two married daughters Elisabeth Hromada and Dorothea Potter all managed to find refuge in South and North America. Her daughter Margarethe stayed in Europe and during the war she went from France to Italy and lived in Milan – which came under German rule in September 1943.

Milan was the site of the German headquarters in Italy and became a center for the Italian Resistance as well. Margarethe WEISSENSTEIN married an Italian named Giulio De Francesco and was persecuted under the name Margherita De Francesco. Her precise relationship to the resistance can’t be established because the SS destroyed all the records of their terrorism when they retreated, including the prisoner books of the »police transit camps« in Fossoli and Bozen/Bolzano. But it has been documented that Austrian Jews, including the 46 year old Leo KÖHLER from Salzburg, were deported from Italian transit camps to Bergen-Belsen and Auschwitz.

In any case we know that Margherita De Francesco was arrested in Milan and that she was interned in the transit camp in the Gries district of the city of Bozen/Bolzano before she was shipped off to the Ravensbrück concentration camp in a special transport of 68 women on December 14, 1944. The 51 year old Margarethe (Margherita) De Francesco, née WEISSENSTEIN, was killed in Ravensbrück in February 1945 – apparently as a political prisoner. The fate of her husband Giulio is remains unknown.

Under her married name Grete de Francesco, Margarethe WEISSENSTEIN published several cultural studies essays and the book The Power of Charlatans in Basel Switzerland in the 1930s. Her book became the international standard on the theme of charlatanism. It was reviewed by Walter Benjamin in 1938 and was translated into English in 1939 – which led Thomas Mann to write: »I learn with pleasure that you are publishing a translation of Grete de Francesco’s Charlatan which I know and appreciate as a fine piece of work«. 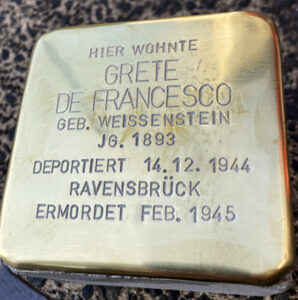 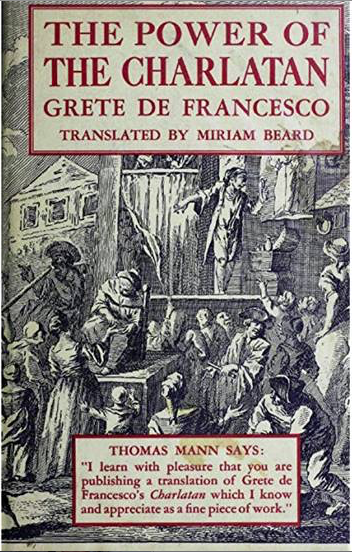 The English translation of Grete de Francesco (Margarethe Weissenstein)’s book The Charlatan with a quote from Thomas Mann on the cover
(Yale University Press, New Haven, 1939) 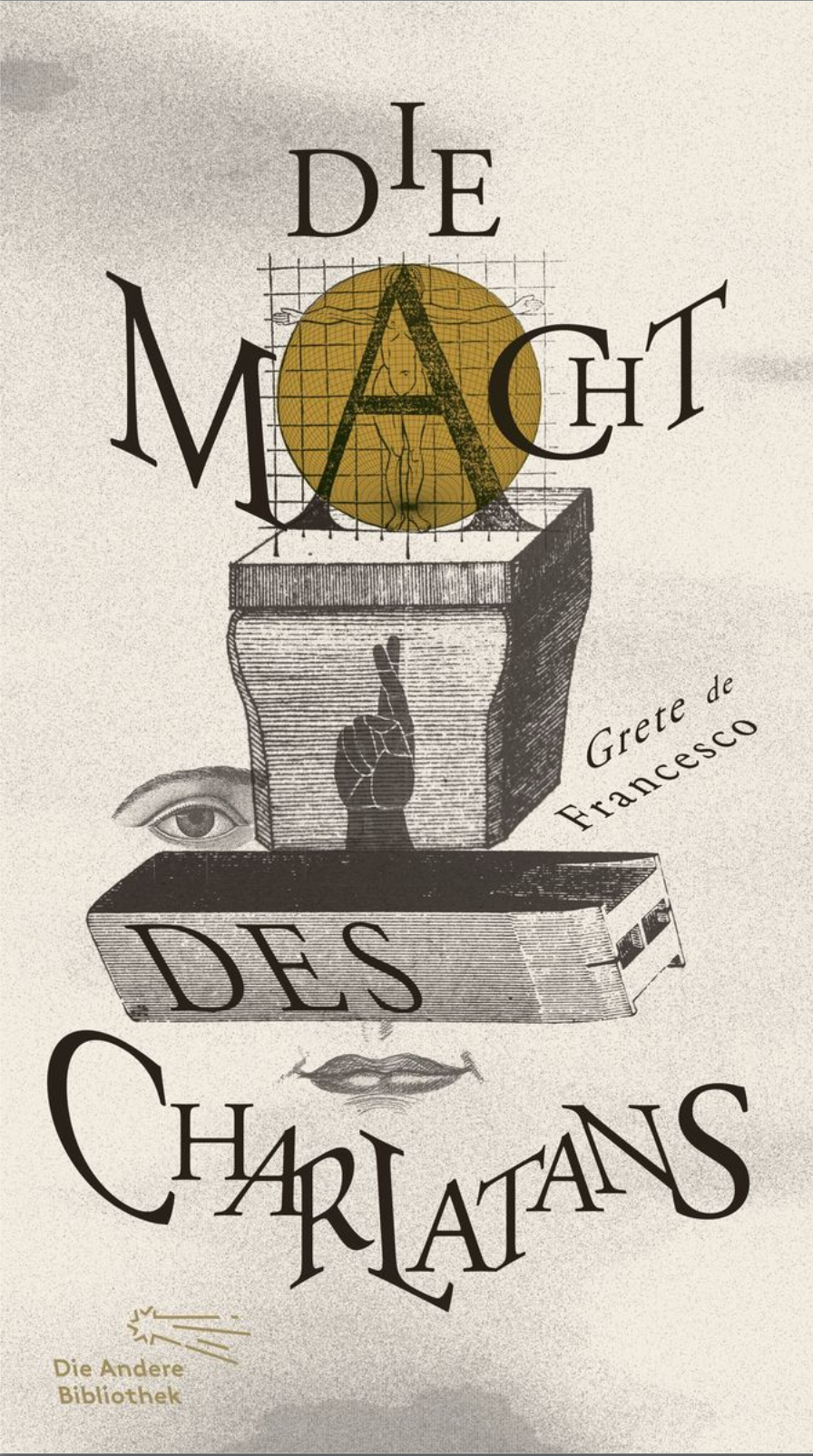 All stumbling stones at Franz-Josef-Straße 11